Dataviz - Create and configure a dashboard

This feed is currently only enabled on the SaaS platform, and is gradually being made available for dedicated platforms.

The creation and modification of "Dataviz" ToBs is subject to a ServiceNav historical right: "Manage dashboards", which also controls access to the Configuration > Reporting.

Not all profiles are therefore able to modify a "Dataviz" dashboard, in order to allow a well thought-out construction of screens and their distribution to a technical team, for example.

Dataviz dashboards can be used through two views, or modes: RUN and EDIT.

The RUN mode corresponds to the use "exploitation", for consultation, in modification of the contents or the configuration associated with the Dashboard.

The EDIT mode is the one proposed when creating or modifying a dashboard, either its structure (naming, deletion) or its content (widgets: configuration, number and positioning)

When accessing the Dataviz tab, if no dashboard exists, the creation is proposed:

If at least one dashboard has already been created, this button is accessible at the top of the dashboard list, in RUN mode. 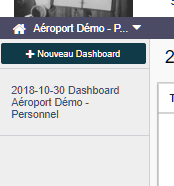 This button is not available when a dashboard is being edited.

Clicking on the button allows you to fill in the title and the level of visibility of the dashboard. 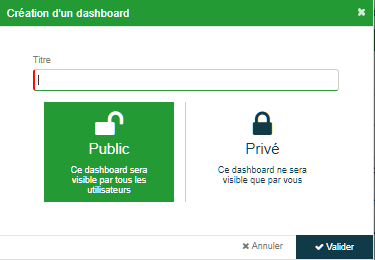 A private dashboard is represented by the icon

Once the title and visibility are validated, a new dashboard is instantiated, empty, in EDIT mode.

A "Dataviz" dashboard can be renamed at any time, and has the default name :

It can be modified, in EDIT mode, by simply clicking on

on the left of the title.

The title of a dashboard cannot be empty.

A dashboard can be defined "by default

which will place it at the top of the list of dashboards.

It is also possible to duplicate a dashboard, by clicking on

In this case, you will be prompted to enter the new name.

The modularity of the Dataviz dashboard is based on its library of widgets, and on the strong capacity of customization that it induces.

The library is enriched during the versions, so new widgets will appear very soon.

A page is dedicated to the detailed census of these widgets: Dataviz: Widget Library

Adding a widget is done by clicking and dragging on the canvas area:

When adding a widget, a configuration window appears. This window differs depending on the widget added.

For example, for a "Graph" widget, which presents metrics in a similar way to the Equipment/Service Detail form:

Once the configuration is validated, the widget is displayed on the dashboard and several actions are possible, depending on the widget used. Here are the actions common to all widgets: 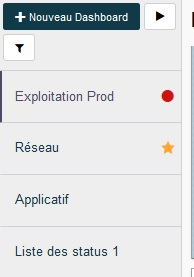