WiFi is everywhere! With the explosion of mobile devices, it has become the primary means of connecting to the Internet and the engine of tomorrow's IoT world.

Initially deployed to reduce the amount of cabling and allow people to access the network more easily, WiFi has grown over time and has had a major impact on changing work habits.

No longer tied to their desks, users can work from anywhere in the company. In the beginning, companies offered WiFi to their customers and visitors as a differentiator. Today, it is an expected and almost mandatory service for all types of businesses (cafes, retail stores, airports, offices, ...).

WiFi is now an integral part of the DNA of companies (and their customers), it is becoming a production tool and the need for quality of service is therefore increasing.

In the early days of this technology, it was sufficient to ensure the visibility of an access point, by a simple ping.

Now, as WiFi infrastructures become vital to business, they have become more complex.

They now incorporate a software and hardware layer, dedicated to the control of different elements (such as access points), and allow to think of the WiFi service as an ecosystem.

Vendors such as Meraki (with their Cloud Controller) and Cisco (Wireless Lan Controllers) are paving the way for industrialized management of large fleets of WiFi infrastructures, providing administrators with visibility and control over load, and traffic redirection in case of saturation.

WiFi being, as we have seen, a major and critical component for many companies, this service must be managed and supervised with precision. ServiceNav allows to supervise the health of the WiFi service, and its direct impact on the different business bricks.

Server monitoring at the heart of your business

Along with storage technologies and network elements (switches, routers), servers are the foundation of the 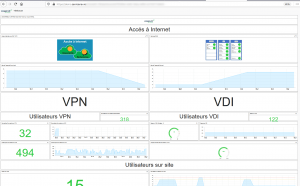 Supervision as a tool to enhance IT services

The myth of the expensive bearded man We're not talking about Santa Claus here, even though it's in season,